Previously, on recapping Game of Thrones…

EVERYONE DIED!? Whoa, crazy! And there’s been leaks that next week’s episode is just going to be 90 minutes of a black screen while Benioff and Weiss read the script for the pilot of Confederate? WILD.

END_OF_DOCUMENT_TOKEN_TO_BE_REPLACED

Previously, on recapping Game of Thrones… If you had your television’s brightness settings calibrated jussssssst right, you might have seen quite the battle between the living and the dead. This week, Sansa Snark presents:

Season 8, Episode 4: The Last of the Starks

Things pick up not long after where we left off. As you might expect, a lot of people are dead. Jorah: dead. Theon: dead. Edd: you may have forgotten because it takes place so early in the episode but, dead. Someone else who is dead is the Night King, and let’s just get this out of the way before I go on a prolonged rant and burst a blood vessel in my forehead: there’s no further explanation of what the whole deal with him was. The Night King was (at least for now unless they spend the entire series finale delving into it) just an evil guy on a TV show doing evil things because he’s evil and evil guys on TV shows do evil things. END_OF_DOCUMENT_TOKEN_TO_BE_REPLACED

Previously, on recapping Game of Thrones… They spent the entire CGI budget on this episode, so by necessity, last week was nothing but an hour of glorious talking. This week, Sansa Snark presents much less talking in:

Well. That sure was an episode, huh? An hour-plus of Game of Thrones at its most action-y that was about 39% well lit, 82% coherent, and 100% tense from start-to-finish. END_OF_DOCUMENT_TOKEN_TO_BE_REPLACED 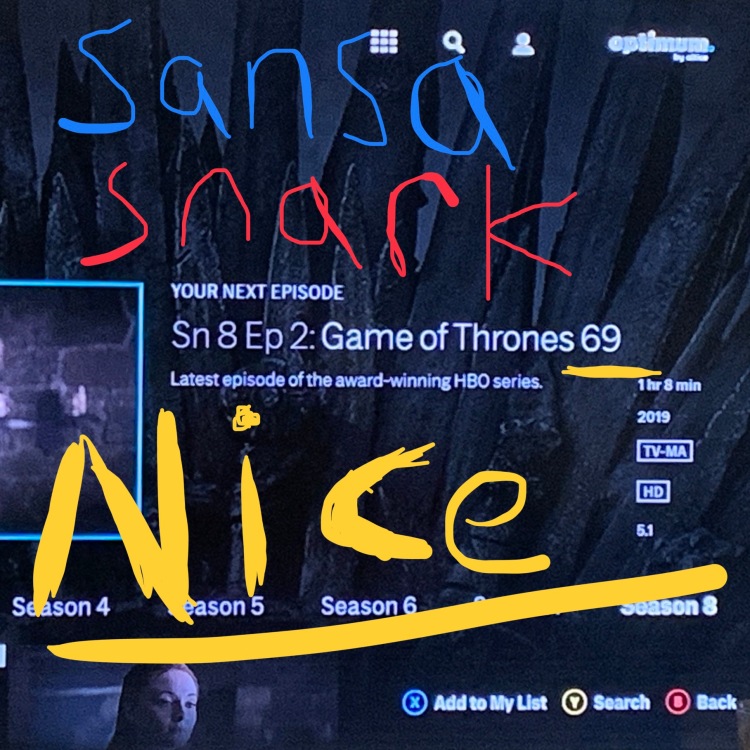 Previously, on recapping Game of Thrones… People were reunited to varying degrees of it feeling so good. This week, Sansa Snark presents:

It’s the night before the big game and Winterfell is getting antsy. Jaime Lannister is there now too, and everyone is EXTREMELY HAPPY TO SEE HIM. Daenerys is regaling Jaime with a depressing story about her childhood. She reveals that, like literally every night, her very cool and totally chill brother Viserys would explain in detail how their father — the Mad King Aerys Targaryen — was murdered and how his blood spilled out onto the floor. Love helping my younger sister fall asleep by explaining regicide.